Written by Elias Howe
Filed under
city guide
Previous / Next As a cyclist it can be hard to find the best roads to ride on. That's why we compile our Cyclist's Guides to Cities. This month we've tackled Los Angeles' best group rides, loops, restaurants, and bike shops.

Los Angeles is one of the most iconic symbols of America. It's a city whose image has been burned into minds the world over by countless depictions in television, film, music, and print media. The sunny beaches and palm-lined boulevards, glamorous restaurants and exclusive clubs. The homes of rich and the famous. The Hollywood sign. As with any city, these depictions can only begin to scratch the surface of reality. Los Angeles is huge, and incredibly diverse - culturally, ethnically, and economically.

Another stereotypical image of Los Angeles is bumper-to-bumper traffic on giant freeways. This is real, but many will be surprised to learn that Los Angeles also has some of the best riding in the US - from flat and rolling rides in the valleys and along the coast, to countless long and winding canyon climbs. The climate allows for uninterrupted riding all year round, and there are so many group rides you'd hardly ever have to ride alone if you don't want to.

Los Angeles is a sprawling city. Most of the good riding is to the north, in Angeles National Forest and west in Santa Monica (Basically everywhere you can see green toward the top and left sides of the map).

If your goal is to have access to world-class riding, look for a place to stay north of downtown or even outside of the city of Los Angeles proper; in the cities of Pasadena, Glendale, and Burbank. Meets every Tuesday and Thursday night just before 6pm just at the Rose Bowl in Pasadena. Facebook | SoCalCycling

In existence for over 60 years, this is one of the oldest and most famous group rides in the country. There are typically two groups - a group setting tempo and a chase group. There can be 150-200 people there, so etiquette is strictly enforced. Watch out for other users of the path such as joggers, walkers, and rollerbladers.

If you’d like to tack on some miles before or after the ride, there are plenty of nice roads surrounding the Rose Bowl that lead into gorgeous neighborhoods of Pasadena, with countless one- to ten-minute climbs. Test yourself on some of these climbs and then drop back into the bowl for an easy spin. Meets every Saturday morning, 8am from Descanso Gardens, or 8:20am from South Pasadena Trader Joe’s (shorter loop). Facebook | SoCalCycling

If you’re looking to redline, this is the ride for you. The group rolls out of town, and then the pace picks up and its a full-on race-ride. The route begins heading east and then turns north towards the mountains before heading back along the foothills roads at the base of the mountains. Another large pack, typically 100-300 riders. As their Facebook page describes it, an "extremely fast paced and dangerous non-sanctioned bicycle ride." About 100 riders participate each week. The route is an out-and-back along the PCH just over 20 miles each way, although many riders use this as a starting point for any of the canyon climbs that branch off the PCH. Departs every Sunday at 8am from Raymond Fouquet Square at the corner of Westwood Blvd. & La Grange Ave. in Westwood Lagrange Velo Club

A weekly, year-round Sunday ride for all-comers. Anywhere from 40 to over 150 riders. This is a shorter route with a variety of terrain from flat to rolling hills to steady climbs, there will be a group for riders of any ability level. Ends at Peet's Coffee in Westwood Village for a cup of joe and a chat. This is a pretty short canyon climb that ends at a hiking parking lot. Good for a shorter - perhaps evening - spin. The route provides some of the best views of LA because it is so close. The Montrose group ride finishes at the base, so you can tack this on if you’re looking to add some extra miles. The locals call them the GMR and GRR. These are Iconic SoCal climbs. The Mountain Road is a steady climb for about 15k, then the ridge road is rolling until Mount Baldy. Then begins a nasty 20km climb at 7% to finish at the base of the Mt. Baldy Ski Area. According to Orucase co-owner Colin Jaskiewicz, “The coolest ride I’ve ever done”. Leave from Santa Monica Pier and ride up the PCH, and then turn up Latigo Canyon. It’s a super twisty canyon road, and a steady climb of 15k at 4%. Once you get to the top you ride on the Mulholland Highway, which turns into Mulholland Drive. There’s a sweet biker bar at the top called the Rock Store.

There’s a professional photographer who hangs out every day at The Rock Store and takes photos of passing cyclists, motorcycles, and cars as they navigate the switchbacks. This is less of a route and more of a region. Griffith Park is big, and covered with gated-off gravel/dirt roads that are open only to walkers and bikes. There are several access points to the park, including from Burbank and Glendale to the north and east, and from Los Angeles to the south. Be sure to check out the beautiful Griffith Observatory, as well as the Los Angeles Zoo. The routes here are not as long but they contain some pretty serious climbs - to get to the iconic Hollywood sign is two and a half miles at an average grade of nearly 10%. 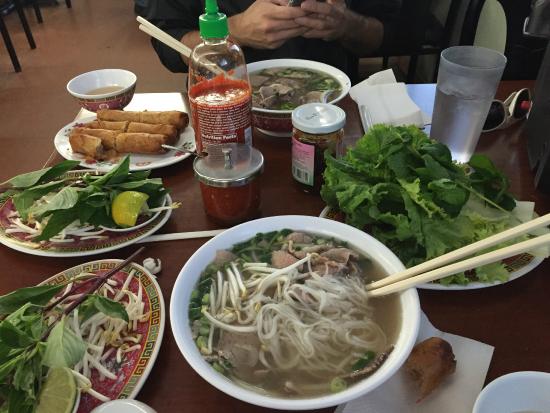 This photo of Pho 87 Restaurant is courtesy of TripAdvisor

Located near LA’s Chinatown, a casual joint that serves the Vietnamese favorites such as Pho and spring rolls. Dine-in or take-out, this establishment is cash-only. 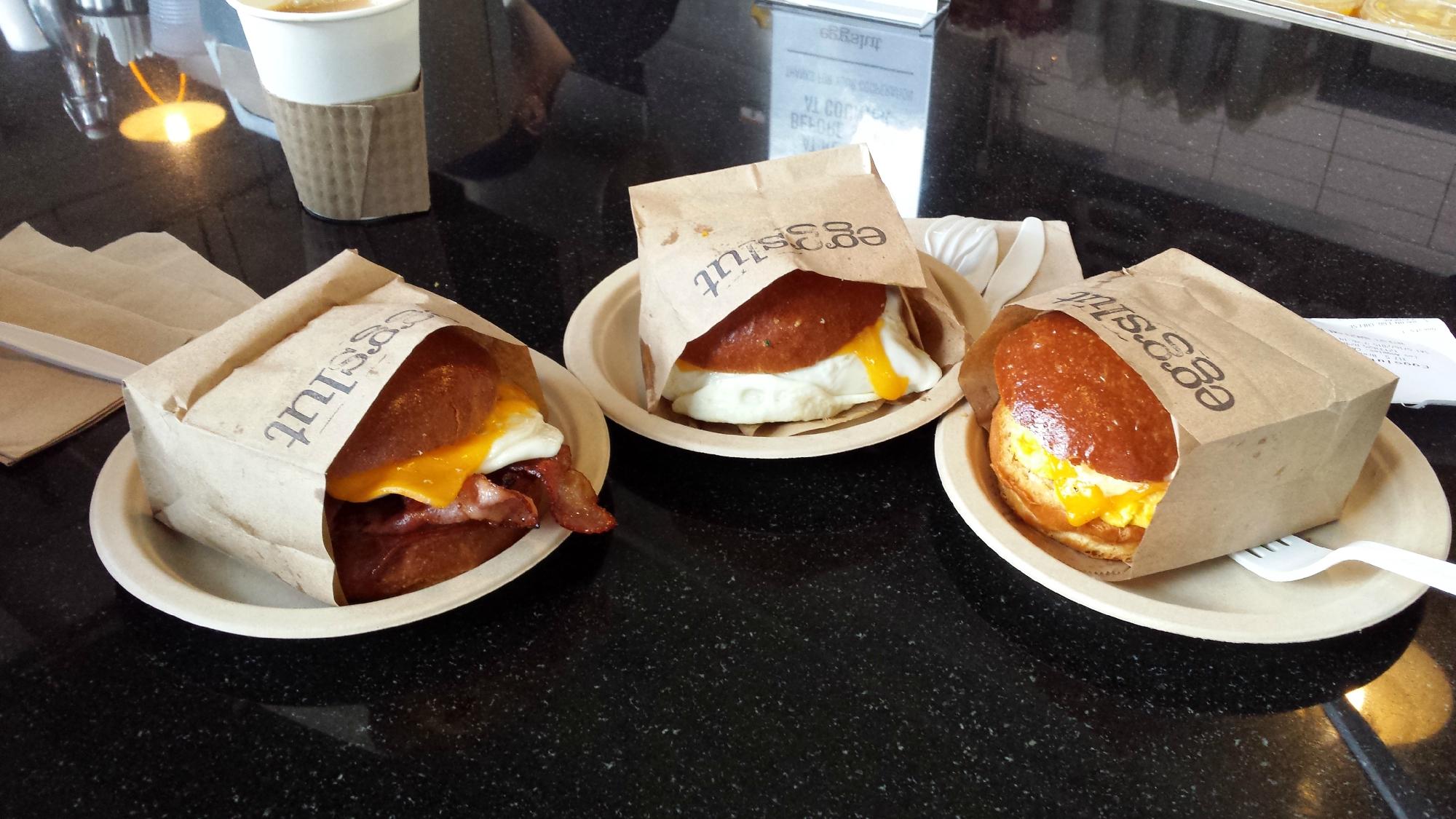 This photo of Eggslut is courtesy of TripAdvisor

Gourmet concept food centered around a single prized ingredient: the egg. These sandwiches are not just for breakfast; they are designed to be a modern interpretation of comfort classics and to make the egg appetizing at any time of day. 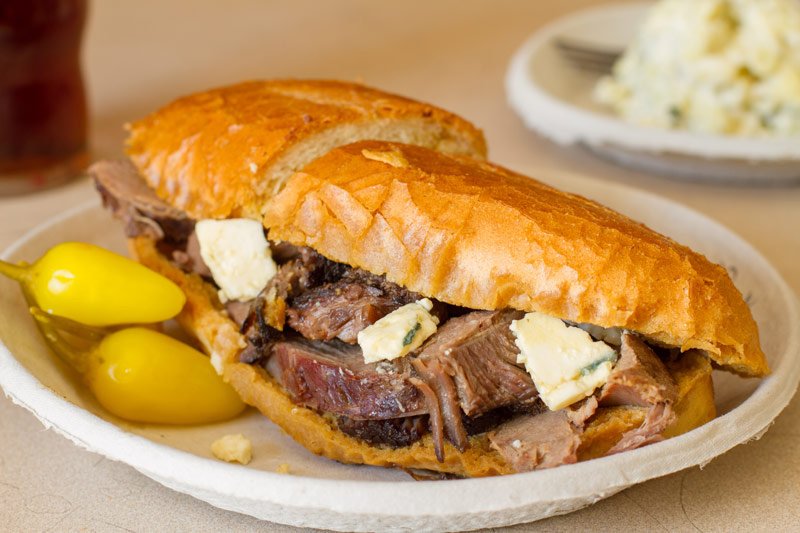 This photo of Philippe's is courtesy of TripAdvisor

A world-famous deli established all the way back in 1908, Philippe’s serves the original French dipped sandwich. If you don’t know what this is, it’s hard to say it better than Philippe’s themselves:

Philippe’s “French Dipped Sandwich” is the specialty of the house and consists of either roast beef, roast pork, leg of lamb, turkey or ham served on a lightly textured, freshly baked French roll which has been dipped in the natural gravy of the roasts. Swiss, American, Monterey Jack or Blue cheese may be added. Gourmet American fare from breakfast to soups, salads and sandwiches. A relaxed setting with indoor and limited outdoor seating, not far from Griffith Park. As the name suggests, a cyclist-friendly establishment. Open for brunch, lunch, dinner, and with a fully-stocked bar and cafe, Pedalers Fork uses only the highest quality ingredients in their farm-to-table menu. Plenty of seating both indoors and outdoors in an absolutely gorgeous setting. Established back in 1936, Helen’s Cycles started as a small repair shop in Venice Beach. The mechanic, Helen’s husband Ted, was also an airplane mechanic for the famous aviator Howard Hughes. As they tell it, Hughes was not happy about Ted working on bikes on the side, so they put the company in Helen’s name. With six locations in greater Los Angeles, Helen’s prides themselves on top-quality service and a great selection of bikes and bike products for all disciplines and ability levels. They even have high-end road bikes for rent (although we prefer to bring our own). Cyclocross. Fixies. Mustaches. Golden Saddle Cyclery is a young, hip bike shop with a higher-end range of products and lots of rad branded shop gear. They’re known for getting out and crushing it, and for their great, friendly customer service. Closed on Wednesdays